We all know the songs he drummed on by we probably don’t recognize his name. Which is a crime! Tommy Aldridge is a veteran heavy metal and hard rock drummer.  Aldridge is noted for his work with numerous bands and artists since the 1970s, such as Black Oak Arkansas, Pat Travers Band, Gary Moore, Whitesnake, Ted Nugent and Thin Lizzy. His most notable work was with Ozzy Osbourne’s first solo albums, “Blizzard Of Oz” and “Diary Of A Madman.”  Here’s a great example of how great Tommy Aldridge’s playing is!

This video was filmed one night in a television studio during the U.S. segment of the Blizzard of Oz tour in late April or early May 1981 along with three other songs. Vocals: Ozzy Osbourne, Guitar: Randy Rhoads, Bass: Rudy Sarzo, Drums: Tommy Aldridge, Keys: Lindsey Bridgewater. 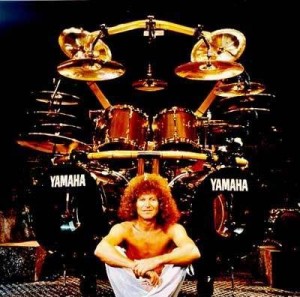 Previous
Weather Report's, "Birdland" As An Uptempo-Boogie!
Next
Antonio Sanchez, A Solo With A Purpose!

This site uses Akismet to reduce spam. Learn how your comment data is processed.